[first]Its been a fun week with lots of amazing sightings and its that time of year when we have loads of babies around.[/first]

We can now see the Sea Eagle chick sitting up in the nest, both parents are really active in looking after it. We are careful not to go too close as we don’t want to disturb the birds, however we can see everything very clearly through the binoculars that we provide for our guests. 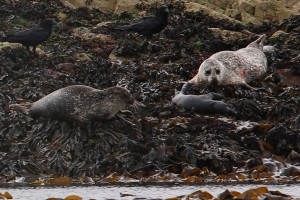 Also we have seen our first seal pup of the season. This is a common seal which despite its name is not that common, they are smaller than grey seals which we also have around here and their heads are much more like a dog with a round head and short snout, the grey seals have a long head with a big “roman” nose. Although the common seal pups are born on land they are able to swim straight away which makes it safer for them. Grey seal pups have fluffy white coats when they are born and have to remain on land for 3 weeks before they can swim, usually for safety grey seals will have their pups on little islands far offshore to avoid predators until they can swim, grey seal pups are born in late summer or autumn.