What a fantastic time we have had in the last couple of weeks as the Sea Eagle chicks have just fledged. We are almost as proud as their parents to see them taking these first flights away from the nest. 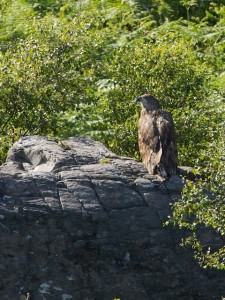 One of the fledged sea eagle chicks resting on a rock

Here is a picture of the second chick to fledge. Quite often they fly a little from the nest and then rest on a rock until they get their breath back and can try another flight. They always look slightly confused at finding themselves in the outside world but also very proud of themselves. It was only another day until they were soaring confidently above the hills with their parents learning to fend for themselves.

We are delighted that both local pairs of Sea Eagles have successfully raised two healthy chicks. It is not uncommon for two Sea Eagle chicks to grow up amicably in the same nest unlike the Golden Eagle where if there are two chicks usually only the dominant chick will survive by depriving the  smaller chick its share of food.