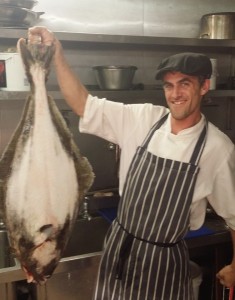 Hi my name is Mike and I’m the head chef at Loch Melfort Hotel in Arduaine. I’ve been head chef at the Hotel for just over a year and I was Sous chef here before that so I know the place very well. I live in Oban with my lovely wife Morven and beautiful baby daughter Summer who is just over a year old now and keeping us both busy.

We are both from Oban and are both very proud of where we live. I began my career with a Catering and Hospitality course at Argyll College which was in Dunbeg at the time in a mobile catering trailer. After working in the Lorne Bar for a while I soon began cooking real food and started work at the Manor House in Oban. This gave me a fantastic start to a great career as it taught me a more French classical way of cooking which many young chefs don’t have any more and therefore struggle with some classic recipes. College is a good start but until you start cooking in a commercial kitchen full time then that’s when you learn to cook.

After 2 years in a one AA rosette kitchen I was ready for my next challenge, so I decided to get a job with Neilson Active Holidays working in Austria and Corfu. I am a very active person so this seemed the right move and I stayed for 2 years. I learned to snowboard, windsurf and wakeboard as well as continuing my cooking career in some great places. After 2 winter seasons and one summer it was time to return home and to stop “playing” for a while.

I returned to The Manor House as Sous Chef and again pushed my skill level by having the responsibility of being in charge of the kitchen in the absence of the Head Chef. This was a great opportunity to push my own creativity and imagination with daily changing menus which allowed freedom to try new and exciting things.

After a year or so I thought it was time for a change so decided to apply for jobs in the Channel Islands. I sent my CV to every respectable employer on the islands and took a job at The Sommerville Hotel on Jersey which was a 2 AA rosette restaurant. As the new Junior Sous Chef I knew that it was going to be much harder than previous jobs but the thing that shocked me and challenged me the most was the amount of customers and menus with very little time to “Faff” around with dishes. You always had to be on your game in this kitchen, with a 100 covers every service instead of 30 which was the norm in Oban.

After a year or 2 working 6 days a week, I could not only cook efficiently and quickly but the standard of food was better with amazing produce cooked well, looking good and tasting better – I am still cooking at this level today.

After what feels like a very long time, but was really only 20 months, I left Jersey and went to Switzerland to work as a Pastry Chef in the Alps. Why not combine my two favourite things, snow and sweets? I worked in the ski town of Champery near the French boarder for the winter and was plunged straight into a very French speaking part of the world. In order to cope I had a crash course in French, especially social French. I knew some kitchen lingo from many years cooking French food, however when snowboarding for 2 days a week this was not enough so I decided if I were to carry on doing winter seasons then I would go into luxury British speaking chalets in Switzerland so I got a job as a chef for Ski Verbier in Switzerland.

Here I worked as a chef for a 5 star chalet company specialising in the resort of Verbier. Due to my hotel experience I was given the job as Hotel Chef which was great as the hotel had lots of character so I was happy to call it my home for a while. So much so in fact that an opportunity arose for Hotel Manager within the company the next season. With mutual agreement, I was trained for the position and took a step back from the kitchen for a while, this way I could change the way we worked and help my team achieve our goal to run a successful business.

I did this for 4 more years as I loved everything about the job and I loved my time in the Alps and would have stayed there forever had it not been for a nasty knee injury followed by a chance encounter with a girl from Oban, who changed my life and I now call my wife.

We have now been happily married for over 3 years and very much looking forward to raising our family in the same place as we grew up. For me, Loch Melfort Hotel is the best place to be as here I can combine my skills into building a strong and thriving team who are using as much local produce as possible to ensure we are using the best the West has to offer.

I’m very proud to be leading this team on our goal to satisfy as many hungry diners as possible.

If it’s a formal experience you are after then come join us in the Asknish Bay Restaurant where you can choose from our daily changing 4 course Table d’hôte menu or choose from our grill menu which includes lots of local delights such as lobster, scallops, and steaks. If you fancy something different go for our a la carte menu as they all have unusual and interesting combinations which keep changing to keep my local regulars entertained.

Even in our less formal Chartroom Bistro we make as much as we can in house and pride ourselves to achieve this. So whether you fancy a homemade pizza with your choice of topping, a hand minced Argyll reared venison or beef burger in our own bun or fancy something caught from the local shores the Bistro has something to suit everyone.