The final instalment of island trips off the Scottish West Coast. In part 3 we take a look at what to see and do on the islands of Coll, Tiree and Ulva.

Want to learn more about  other island on the West coast of Scotland? Take a look at Series 1: Mull, Iona and Jura, and Series 2: Lismore, Islay and Kerrera.

The Isle of Coll

The Isle of Coll is one of the most outer of the Inner Hebrides. Poking out in the ocean alongside the Isle of Tiree, the history of Coll can be traced as far back as the 6th century, when an Irish invasion led to the creation of the Gaelic kingdom of Dál Riata (which included Coll). The island is now famous for its remote dark skies, the lack of artificial light across the evening makes Coll one of the best places in Europe for star gazing. As a result, Coll Bunkhouse and Cosmos Planetarium have recently joined forces to bring tourists an immersive astronomical experience that you’d be hard pushed to come across in most parts of the world. If you’re heading to the Isle of Coll for this reason, we recommend you visit between October and March. Northern Scottish Summer days can be incredibly long, with the sun staying up until late into the evening by June. 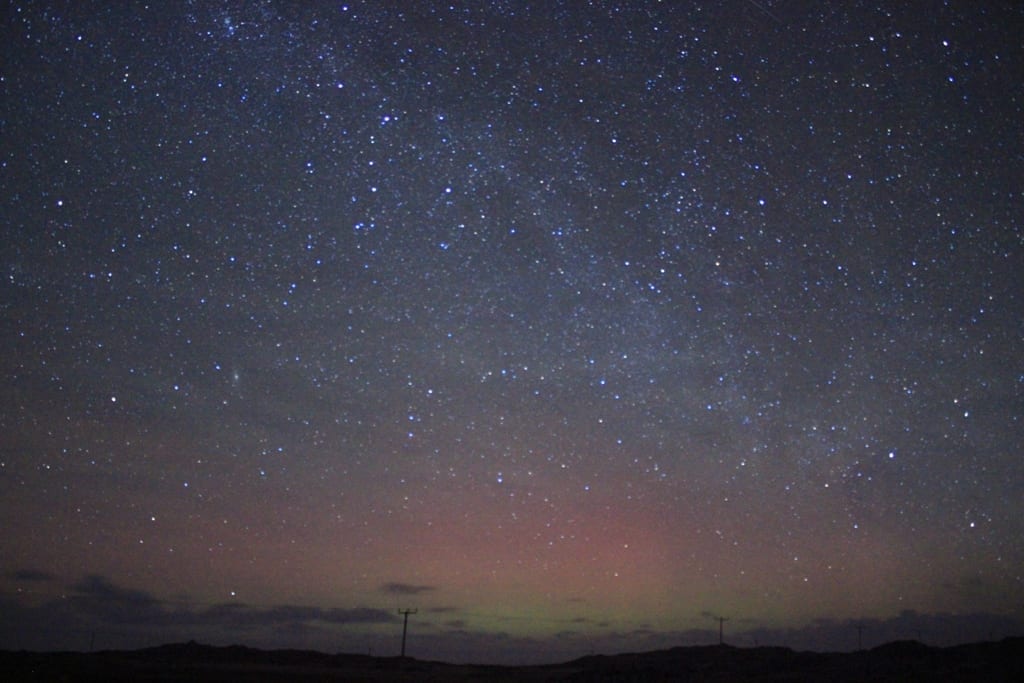 It’s possible to do a day-trip to Col, but (as with Tiree) ferries are limited. A quick flight with Hebridean Air Services is a lot easier if you’re short on time. Passengers can book a same day return to Col and flights are extended into Fridays and Sundays (on top of their usual schedule) during the Summer months. For travellers who aren’t as rushed, one of the easiest ways to get to the Isle of Coll is by ferry. There is a car ferry from Oban to Coll every day throughout the year, kept running by Calmac Ferries. This is increased to two ferries a day on a Saturday during the summer months. No car? There is no public transport on Coll, but hitchhiking is quite common across the Scottish islands. For those a little nervous about catching a ride with a stranger, some accommodation providers on Coll (such as the Coll Hotel) have bikes available for hire. 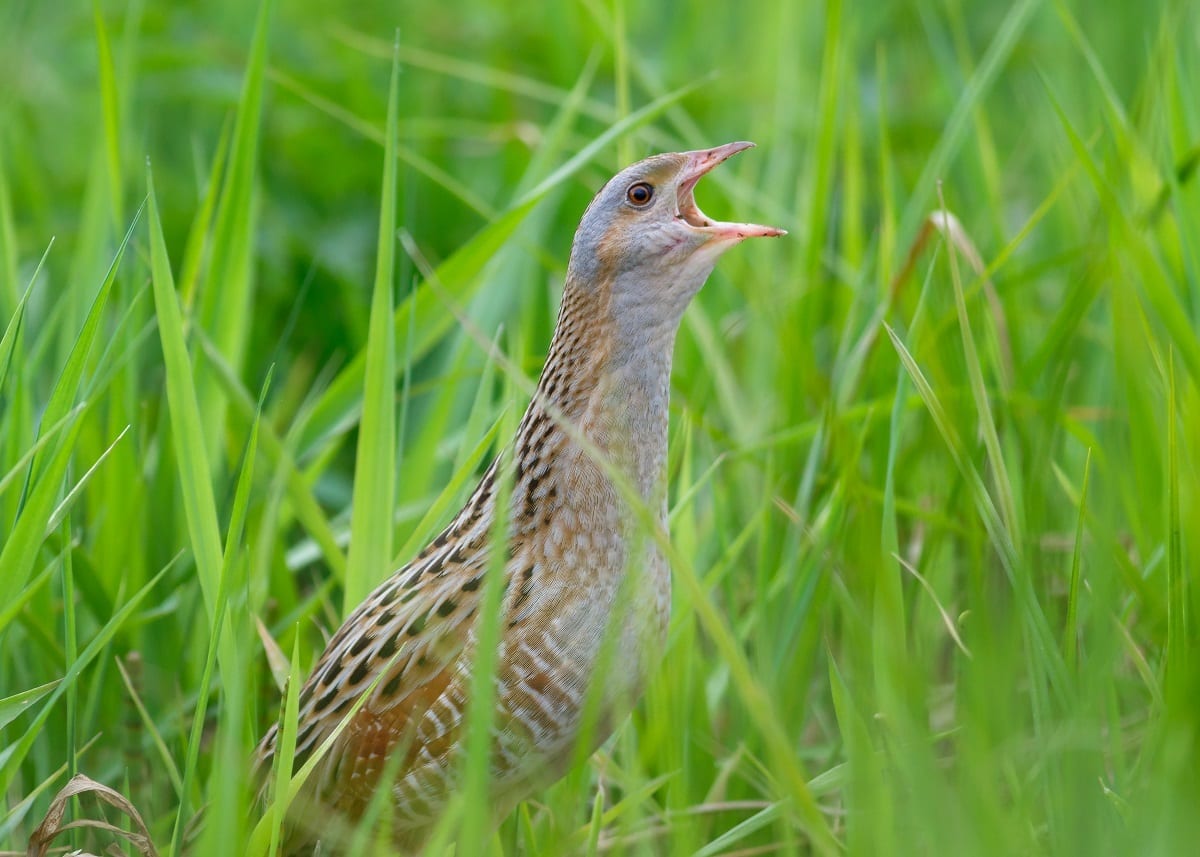 As well as its dark skies, Coll is famous for its picture-perfect beaches. Cliadh beach is wonderful for seal spotting and heading up to higher ground will often offers up a glimpse of a basking shark, dolphin or whale. There are a nice number of businesses offering photography workshops around the area, meaning you can capture these sightings with some added professional clarity.

Wildlife lovers should also be sure to visit the RSPB Nature Reserve. The site is renowned for being one of the best places to observe the island’s favoured corncrake bird. There’s been much concern for the corncrake, as its population has seen a major decline in recent times. Numbers are slowly recovering, with the RSPB (and the park) playing a part in the success. 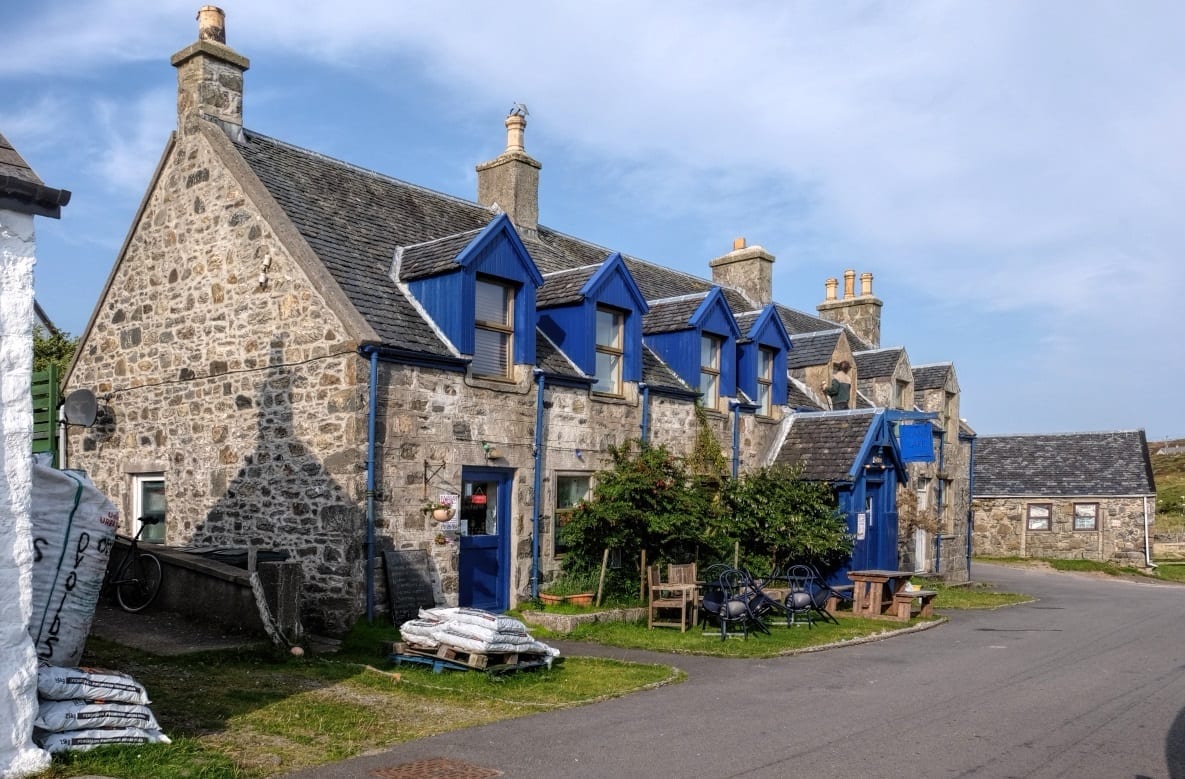 Naturally, it’s not uncommon to see a raining day on the Scottish isles. The Island Café is a cosy, cheerful spot that serves up legendary Sunday roasts. Their hot, homemade meals (alongside organic beers, wines and ciders) are a welcome treat on a blustery, wet day. Island visitors can also take shelter from the wet weather by signing up for a bit of local crafting. Tammy’s Pottery gives guests the opportunity to make their own wobbly mugs, browse their local art gallery and buy treats for loved ones from the gift shop.

The Isle of Tiree

Scotland’s best kept secret! Tiree is the most Westerly of the Scottish Inner Hebrides Islands, proudly facing out into the Atlantic Ocean and guarding the rest of the West Coast. It’s a small little place, at around 12 miles long and only 3 miles wide. If you’re looking for good weather, Tiree has some of the highest levels of sun on record, and benefits from the warm Gulf Stream. With very little woodland or hills, the island’s main tourist draw are the glorious white-sand beaches, often likened to those of the Caribbean! 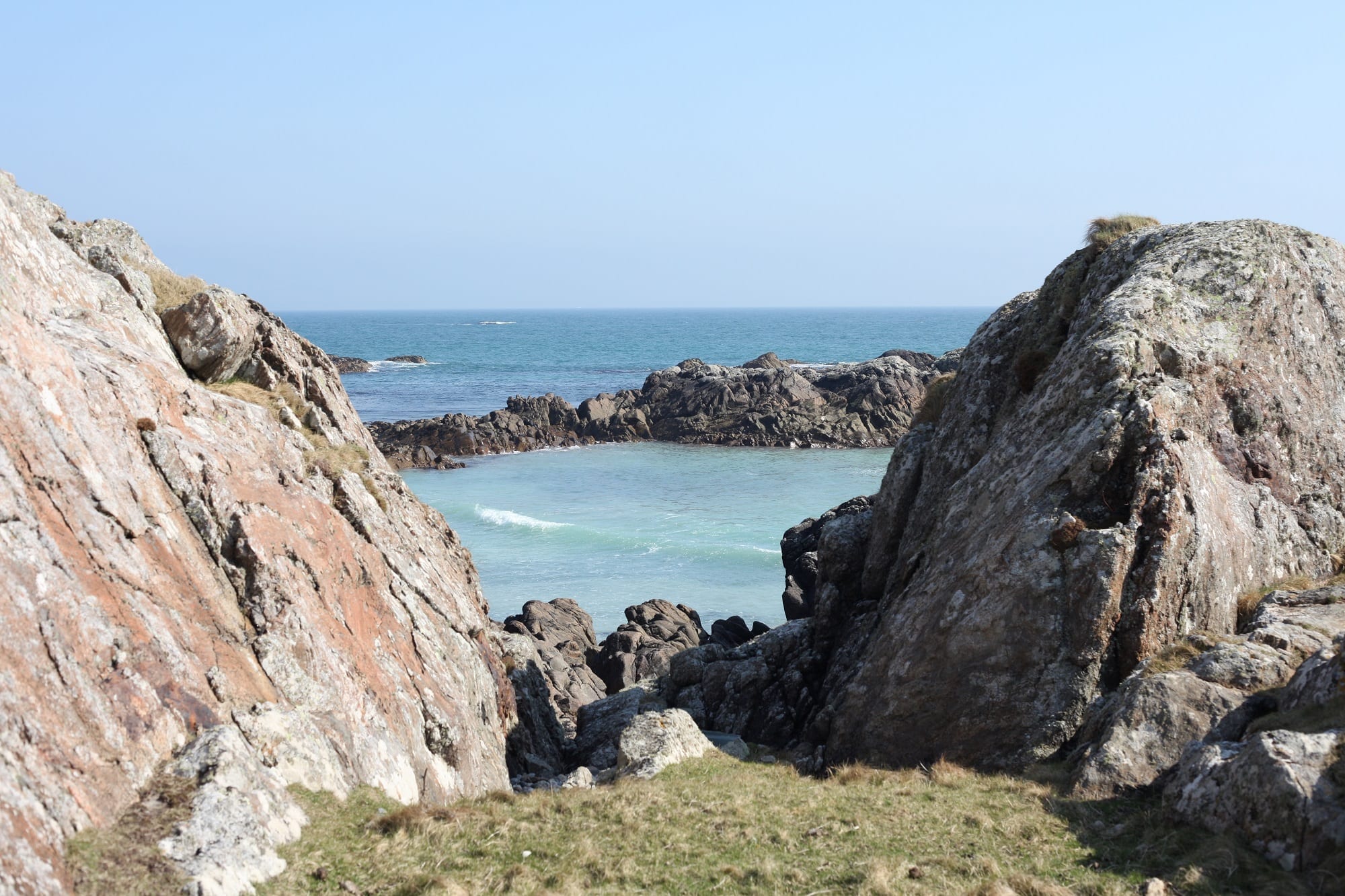 Views of the ocean from Tiree’s beaches

A trip to Tiree can be done in two ways. Firstly, a ferry from Oban, which runs once in the morning and once in the afternoon. Ferry trips might make one-day trips tight, but luckily Hebridean Air Services offer flights to Tiree on Mondays and Wednesdays. The small half hour journey allows for plenty of time to explore the island before heading back to the mainland.

Unlike a lot of Scotland’s islands, Tiree is very flat and has no significant mountains for nature lovers to explore. However, what the isle lacks in rocky landscapes, it more than makes up for in beaches (18 in total!). The tropical-looking white sands draw some of the most experienced surfers and windsurfing enthusiasts. The unique position of the island means that if surf conditions aren’t right on one side of the island, you need only shift to another to catch a wave. The environment around the popular Loch Bhasapol is so ideal, that paddle boarding, sea kayaking and land yachting are also on the list of activities open to visitors. 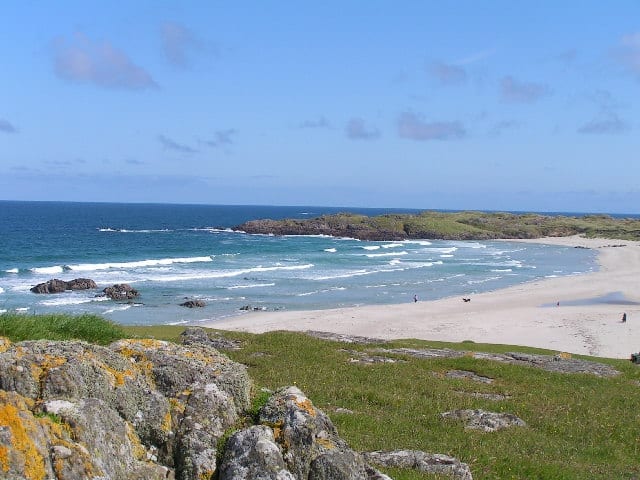 A day of water sports will have your appetite worked up in no time. On the Western side of the island sits the charming Ceàbhar Restaurant; an establishment that serves home-cooked meals whilst keeping the impact of local environment in mind. Its coastal location allows for panoramic sea views, whilst enjoying brew craft beers and eye watering sunsets.

As with Coll, Tiree is a magnificent place to spend the evening staring at the skies. A clear night has been known to give explorers a glimpse of some real universal wonders, including The Milky Way, Orion and (if they’re really lucky) the Aurora Borealis. There are many dreamy spots take advantage of the lack of light pollution, however, islanders have dedicated Balevullin as their Dark Sky Discovery Site, due to its easily accessible location.

The Isle of Ulva

The small Isle of Ulva, just off the Western coast of Mull is only open from Easter to October; a ferry taking passengers with bicycles or on foot from 9-5pm each day. Until 2018, the island was privately owned, only recently being bought out by a community group from the North West of Mull. The crossing is quick, and part of the visiting experience. Ferry goers must call for the ferry by uncovering the red panel on the pier. This service is closed on Saturdays but opens on Sundays from June to August. In a bid to maintain the needs of the community, whilst preserving the island’s natural beauty, there are no tarmac road on Ulva. Visitors (and residents) are limited to travel by foot, or by bike. 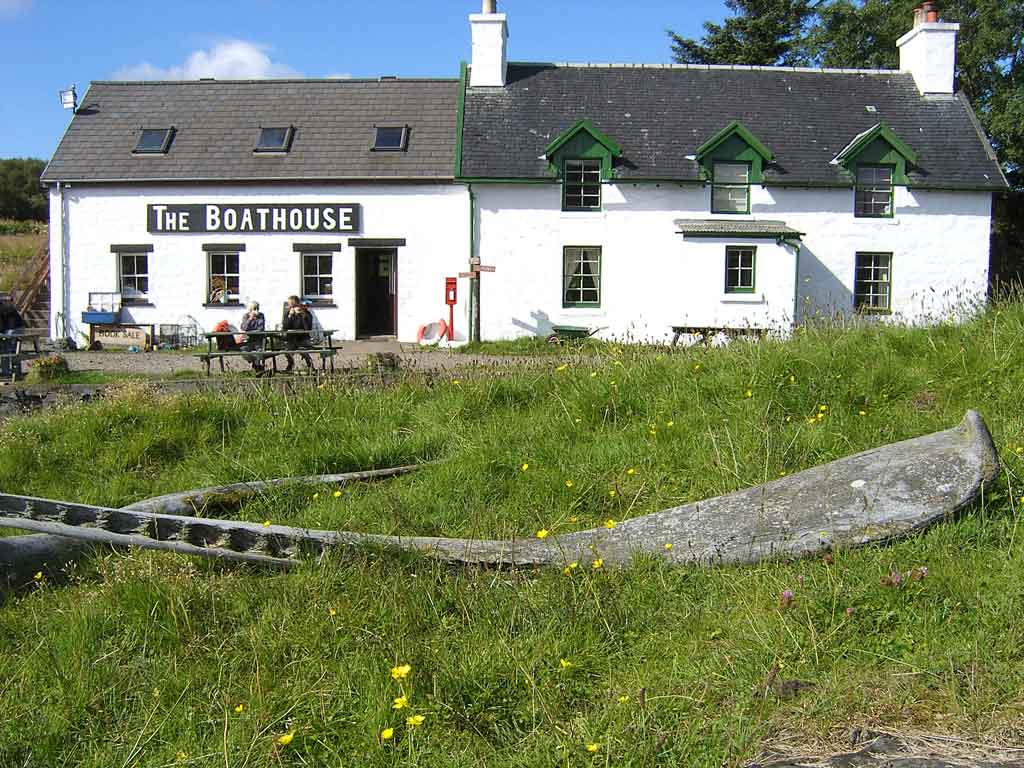 The Boathouse is a great place to stop for a spot of lunch.
Source: https://www.isle-of-mull.net

Despite its size, the Isle of Ulva offers up an impressive range of attractions for visitors. There are multiple walking trails across the island, varying from small rambles to more experienced 3-hour woodland treks. The open moors and woods of the area are home to an intense amount of bird activity all year round and enthusiasts delight in the seasonal events that come as a result. Terns come to the South of Ulva to breed every year, whilst puffins make a pilgrimage to the West and the North in early Summer. 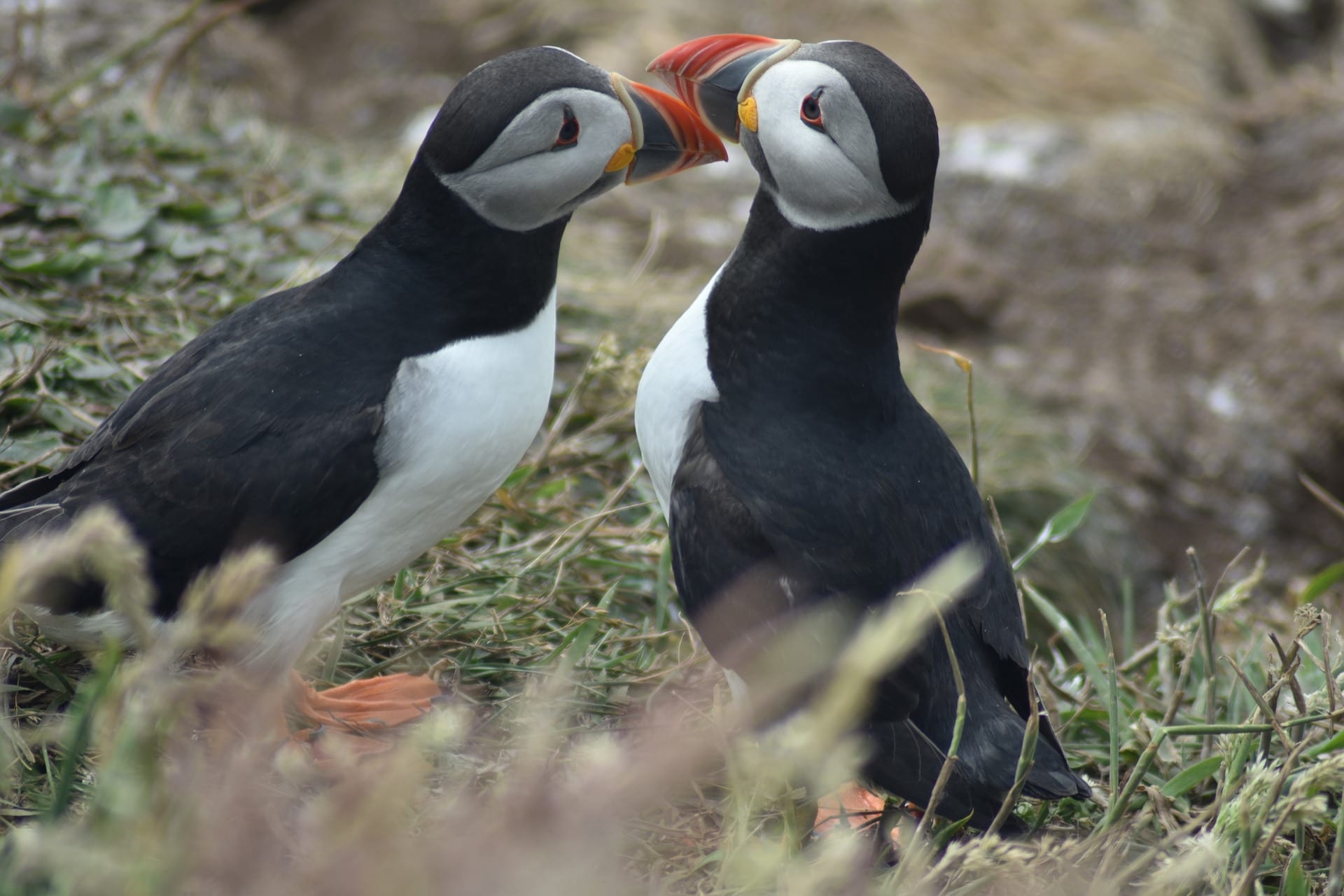 The ruined circuit of Livingston’s Walk will take day trippers along to the prehistoric site of Livingston’s Cave. Studies of the gloomy little abode suggest traces of occupation that date back to around 6000 BC! If that’s not enough to quench your thirst for history, the standing stones of the island stand exactly where they stood way back in 1500BC. The stones are part of a legacy left behind by pre-Celtic communities, who disappeared long before the arrival of the Vikings that finally named the island. 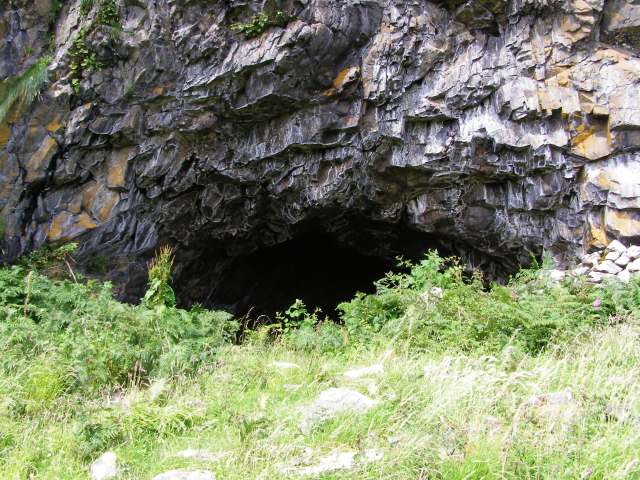 Not far from the ferry landing, you’ll find Sheila’s cottage; an accurately restored, traditional thatched cottage that now operates as a heritage centre and museum. This quaint little home was once home to a lady named Sheila MacFadyen who worked as a dairy maid. The reconstruction takes into account every detail of Sheila’s life, including her dresser and sleeping set-up. A visit to the cottage is well teamed with a spot of lunch at the Boathouse Tearoom (en route to Sheila’s dwelling). This charming, bricked restaurant bake their bread fresh on site, source their oysters from locals farms and serve up newly harvested crab, prawns and squid.

Looking to explore some of the islands in our series? Our hotel is conveniently situated just down the coast from the main port of Oban, making it a wonderful overnight stop point before taking to the seas on your Scottish island adventure. Take a look at our website for rates and extra things to do around the area.