We continue our series of island trips off the Scottish West Coast. In part 2 we take a look at what to see and do on the islands of Lismore, Islay and Kerrera.  Missed part 1? Take a look at the ways to explore the isles of Mull, Iona and Jura.

The Isle of Lismore

A stone’s throw from the coast is the Isle of Lismore, squeezed neatly between Oban and Mull. A short 5-minute passenger ferry from Appin allows you to ditch the car and embrace island life. A lovely way to explore is by bike, with a few vendors offering daytime hire near the ferry terminal. Lismore is also accessible by ferry from Oban, allowing visitors to bring their car along for the ride. This route will take you around an hour. Familiarise yourself with the island by visiting the Lismore Gaelic Heritage Centre. The centre was a local project, created with tremendous support from the islanders and designed to fit with the landscape. Host to a museum, cottage, shop and library, this delightful tourist attraction was built to be ecologically friendly, sporting a grass roof and geo-thermal heating. The museum has an emphasis on the importance of the Gaelic language and culture on the island (before the English language was imposed on it). Visitors will learn about Lismore’s landscape and population history via a series of exhibitions, lectures, performances and special events.

History lovers won’t be disappointed by the number of castles on tiny Lismore. Tirefour Broch is one of the best-preserved iron age monuments in the country, whilst Castle Coeffin stands proudly on the North West coast. Steeped in history, the structure was built in the 13th century on top of the site of a Viking fortress. Special remaining features of the castle include an old fish trap, which would have been used to provide a steady supply of food to its residents. 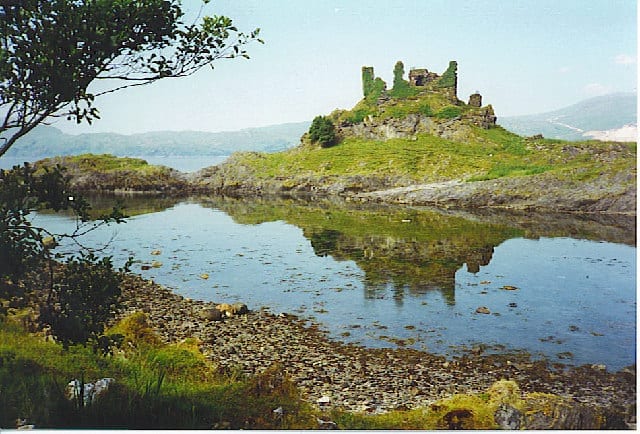 It’s no surprise that Lismore is also popular with walking enthusiasts. The name Lismore comes from Gaelic – Lios Mor – meaning ‘the big garden’. At 12 miles long (and only 1.5 miles wide at its widest point), the island is a great place to explore if you’re short on time. Along your walk/cycle, look out for Tigh Iseabal Dhaidh, a traditional late 19th century cottage open to tourist in the summer months. The old limestone quarry is also an interesting place to go exploring, dotted with abandoned kilns and cottages that give another insight into past local life. Those looking for an ambitious walk could try the 3-mile hike over to Achadun Castle on the West of Lismore. The ruins here date back to the late 1200’s and have wonderful views of tiny Bernera island. As well as walkers, bird and wildlife enthusiasts are fond of this small island. Despite its size, the Isle of Lismore attracts a fairly good range of natural fauna and wildlife. The plant life includes many lime-tolerant species on the island, most of which cannot be found on the adjacent mainland. 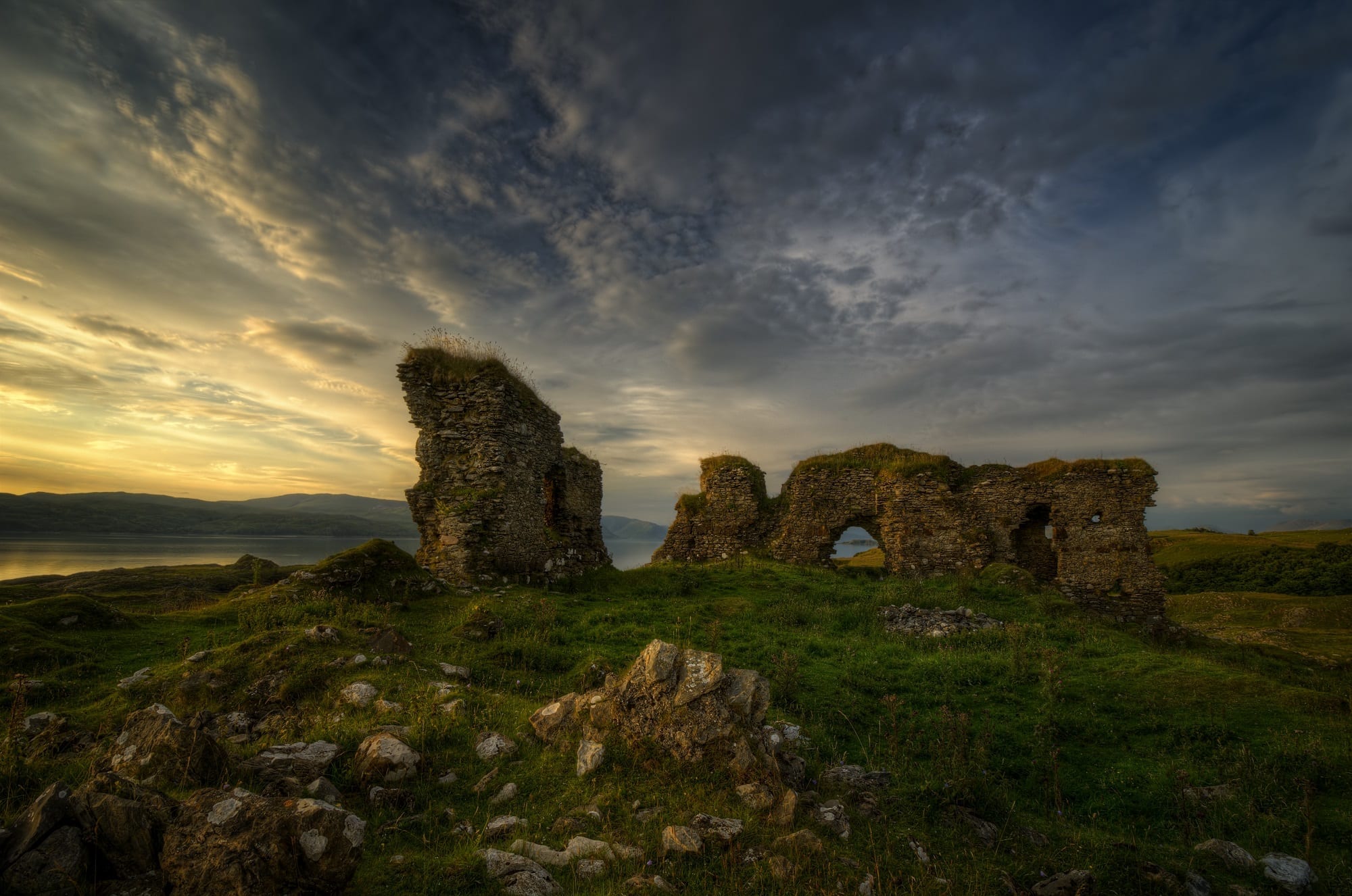 Ruins of Achadun Castle in the light of the sunset

The Isle of Kerrera

So close to Oban that you could almost swim, but please don’t! Kerrera is another small island accessible by ferry, either from the port at Gallanach or via the passenger only ferry from the North Pier in Oban. Cars are banned (except for those of the locals) and in 2016 it hosted a population of just 45 people. For those taking the Oban passenger ferry, get yourself accustomed to Kerrera by pre-ordering one of the Waypoint Restaurant’s fresh seafood meals. This special reservation service ensures you feast on the freshest crab, Loch Creran oysters and local Oban lobster. 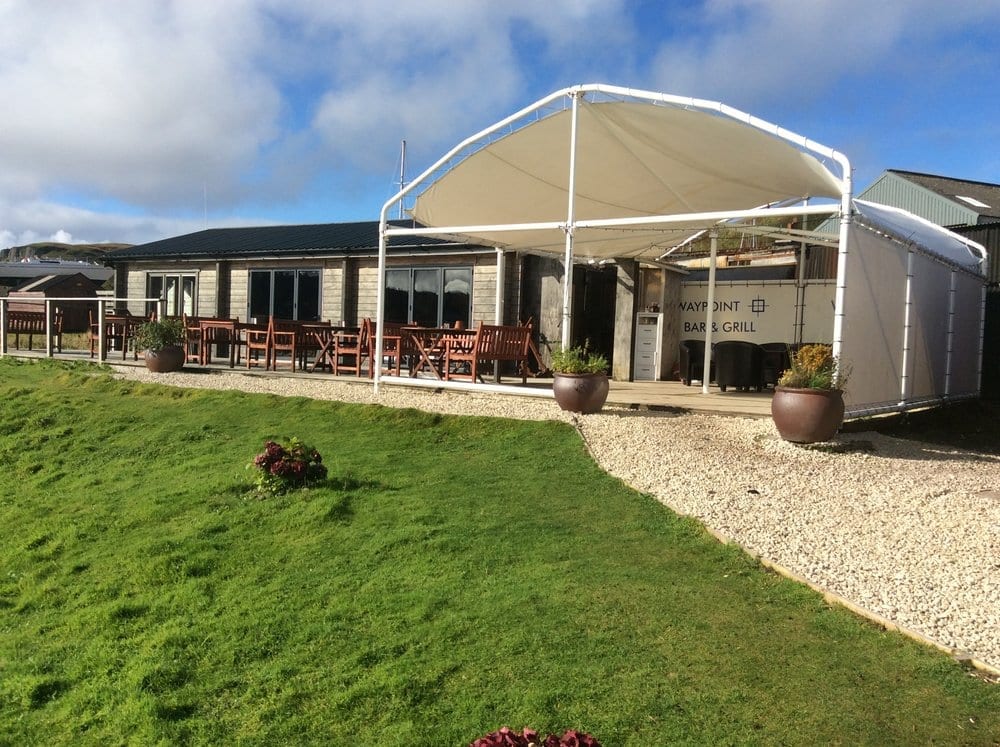 The island is a wonderful place to distance yourself from modern life. Visitors are transported back to times gone by during a stop past 16th-century Gylen Castle. This old structure, which once guarded one of the busiest trading routes in the region, now teeters gingerly above the rocky coastline. A few of the building’s old inscriptions can be made out above main entranceways and the forework gatehouse still stands complete with its gun loops. From here, it’s easy to imagine how defenders of the castle fired upon the threatening bays below. Gylen Castle can be visited as part of a circular 3-mile walk. The route takes ramblers around the Southern half of Kerrera. Be sure to take good footwear, as the terrain here can be rough and boggy in parts. The walk also delivers the promise of fresh home-made soup and gooey cakes from the locally owned Kerrera Tea Garden & Bunkhouse. On bad weather days, this eclectic and homely little café comes with a warm smile and sturdy roof to shelter you from the blustery winds. The North end of Kerrera is also not without it’s charm! A walk across the top of the island will impress visitors with views across Oban Bay and the town of Oban beyond it. 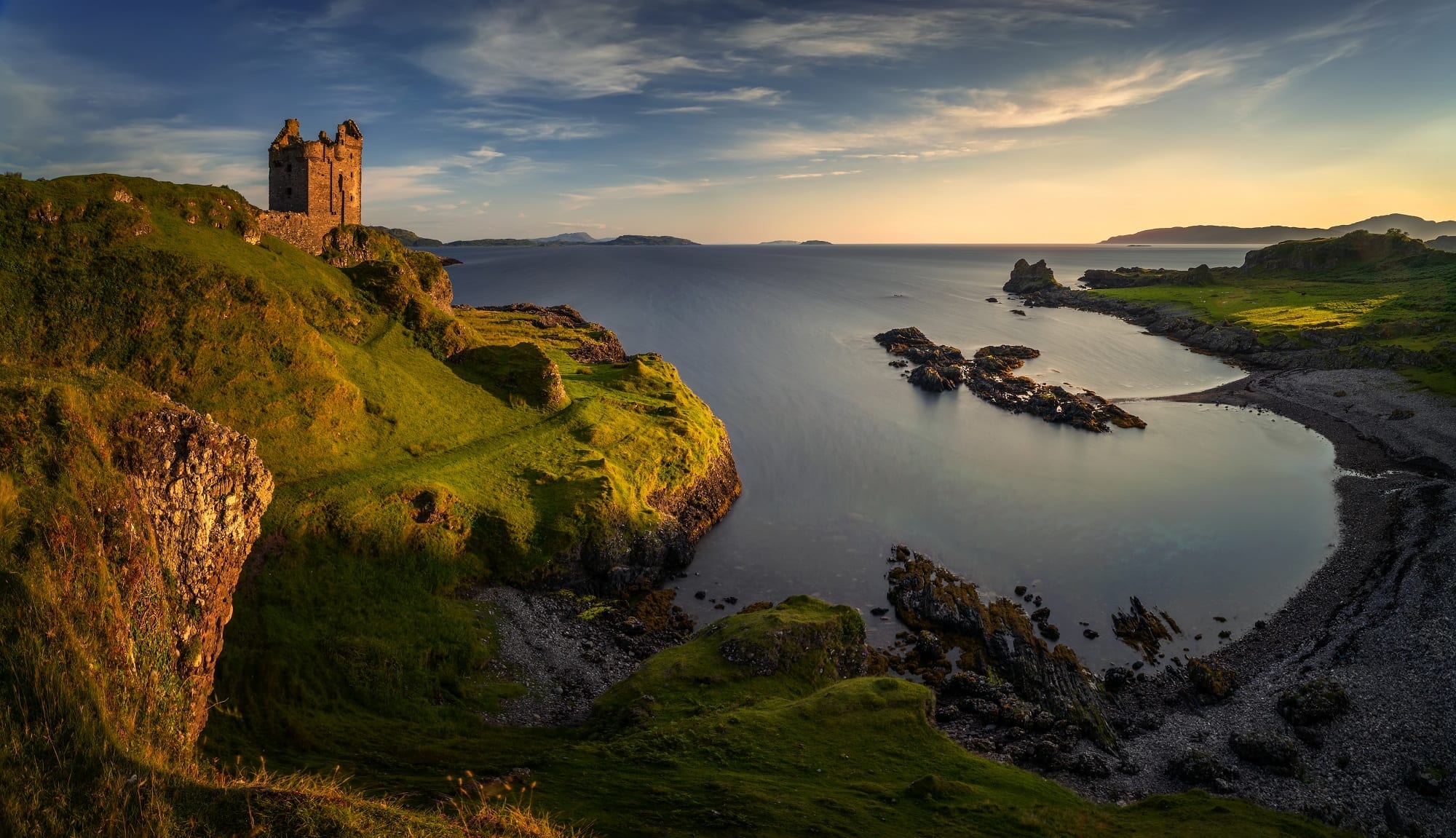 The Isle of Islay

As with its neighbouring island of Jura, Islay is known for its whisky. The climate here has made the land famous for its distinctively peaty whiskies, and some now even refer to it as ‘Whisky Island’. The terrain on Islay is wonderfully fertile, perfect for growing barley. It also has excellent pure-water sources, alongside plenty of peat. There are now 10 whisky distilleries across this Southernmost island of the Inner Hebrides and also a couple of gin distilleries. With so much trade coming from this industry, it’d be rude NOT to do a distillery tour on Islay. A ferry ride from Kennacraig Ferry Terminal on Scotland’s West coast will take you around 2 hours, landing in either Port Askaig or Port Ellen (depending on time). For those looking to take in a distillery tour close to a port, Caol Ila is only a short walk downhill after the main landing point. As well as a standard distillery tour, Caol Ila also offers a chocolate and whisky tasting experience. This tour allows visitors the opportunity to enjoy a variety of whiskies, served with a selection of luxurious award-winning highland chocolates. As with most island distillery tours, pre-booking is recommended.

Beach combing is an easily enjoyed activity across Islay, but have you ever considered wild swimming? As a increasingly trendy way to take an alfresco dip, Islay’s popularity with wild swimmers is on the increase every year. With 7 miles of golden sand and rolling sand dunes, Laggan Bay on the island’s West coast is a great spot for a paddle (especially in warmer Summer months). As the longest beach on Islay, you’ll always find a spot to yourself. Off season, you may even find the entire beach blissfully deserted. Those wanting to incorporate a little more adventure into their beach excursion would be wise to head to Loch Indaal. This sea loch offers an array of water sports, including yachting, canoeing, surfing and even a little wild swim. Here, there are points at Port Charlotte, Port Ban and Black Rock, all with accessible swim spots. With so much to see and do on Islay, many travellers opt into an overnight stay. Golf lovers will delight in the convenience of the Machrie Hotel, a newly refurbished, white-stone stop-over, just a few metres away from their 18-hole Golf Course. The original older building of this hotel remains as a greeting point for guests but is now complimented by an extension styled with contemporary furniture and a sleek Scandinavian feel. 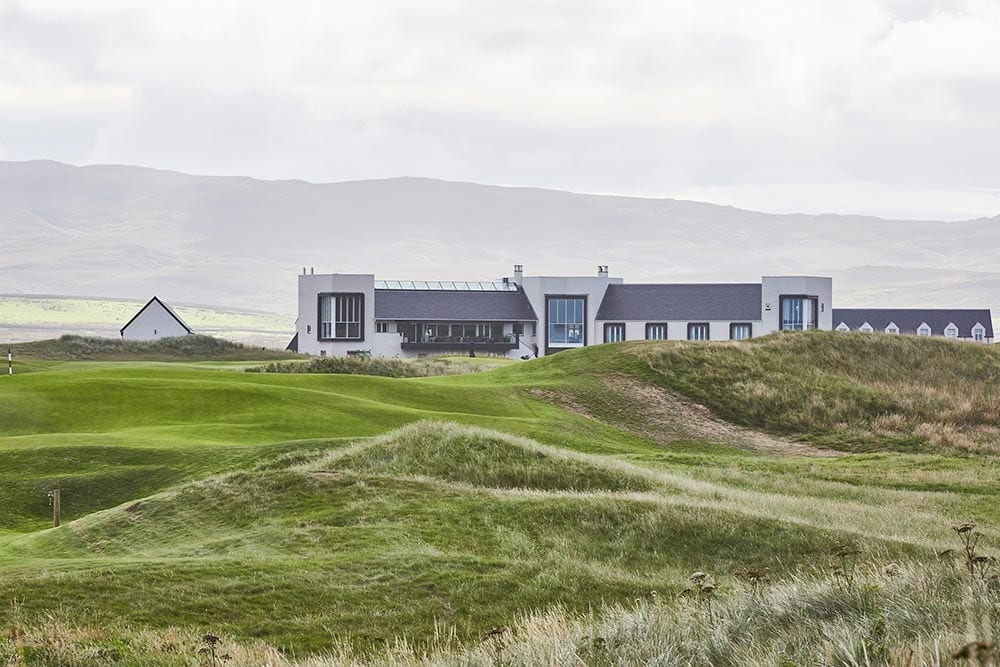 For a local’s experience, Glenegedale House sits in a distinguished position with uninterrupted views out across the Atlantic. With its four individually-designed bedrooms, fluffy towels and roaring peat fires, it’s easy to become completely immersed in island life here. Co-Owner Emma is a keen baker. The aromas of freshly baked bread, cakes and muffins are all a regular occurrence in this house. Guest are treated to Emma’s creations at every opportunity, accompanied by tea and coffee – the perfect way to relax after a busy day exploring. 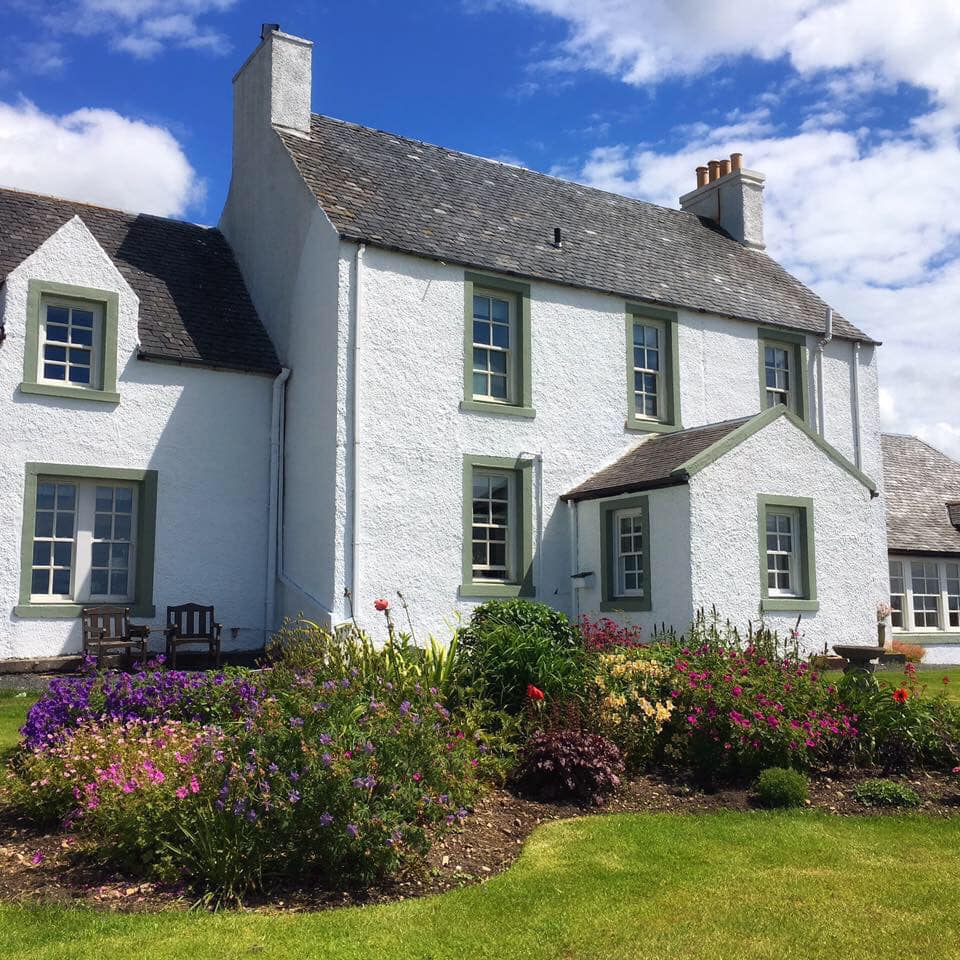 Enjoy our island series? Be sure to watch out for our island guide to Coll, Tiree and Ulva. Coming soon!