Scotland is home to a wide variety of wildlife. Being by the the sea, and with a coastline longer than France’s, Argyll is a great place to spot sea wildlife you may not see elsewhere.

a wingspan of 2 metres. Golden Eagles in Scotland do not migrate and will remain in their breeding territories throughout the year. They take several years to reach maturity and normally do not start breeding until they are 4 – 5 years old. The breeding season continues almost all year. The females starts to lay 1 – 3 eggs in early to mid April and incubates them for about 43 days.

The white-tailed or Sea Eagle is found mainly in coastal areas and is the UK’s largest bird of prey. Adults are easier to spot with a pale head and neck, a white tail and yellow beak. Immature birds are much darker brown with a black beak and very little white in the tail. They take around 5 years to reach adult plumage through a series of moults where the plumage become paler brown. Over the same time the beak becomes increasingly yellowish and the tail whiter.

Mull Eagle Watch is one of the best places in Britain to see Eagles.

See our blog on Boat Trips to take you to see Sea Eagles.

There are two types of native deer in Scotland – red deer and roe deer. The red deer is our largest terrestrial mammal

Roe deer are found throughout mainland Scotland wherever

there is a tiny patch of cover they can hide in during the day. Groups can number in their hundreds on the open hill, while woodland red deer tend to be smaller size groups. Stag and hind groups are usually separate other than during the ‘rut’.

Fallow and sika deer have also been introduced to Scotland through deliberate releases and escapes from country parks.

With no natural predators remaining in Scotland, deer populations are often managed to limit their potential impacts on crops and woodland, and to prevent road traffic accidents. Most deer control is carried out over the autumn and winter.

Red squirrels have been part of the Scottish landscape for thousands of years but with only 120,000 red squirrels remaining in Scotland, half the number of grey squirrels. 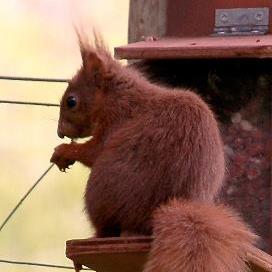 unlike grey squirrels who love them.

Tree cover in Scotland used to be so extensive that a red squirrel could travel from one side of the country to the other without touching the ground – Squirrels can jump more than 2m.

A red squirrel’s tail is particularly important. They are used for balance, communication, as an aerofoil when jumping and as a cosy blanket. They use their tufty ears to help express how they’re feeling – a bit like a dog. Squirrels have double-jointed ankles to help them go down a tree head-first.

The two types of seals you are most likely to see on our coasts are Grey and Common(or Harbour) seals.

Seals spend most of the time at sea and 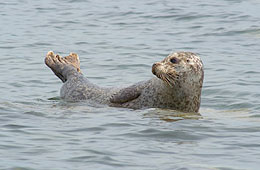 See our blog on Boat Trips to take you to see seals.

Five beavers were re-introduced to the 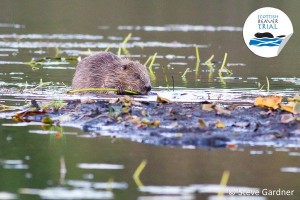 Knapdale region of Argyll in 2009 after being hunted to extinction in the 16th Century. The area is now home to around ten beavers. Signs of life, dams and their lodge are easy to spot, however the beavers are more elusive, only venturing out at night and best spotted at dawn and dusk.

Beavers are highly territorial and live in small family groups. They tend to live to around 25 in captivity but not quite as long in the wild. They mate for life with 2-4 kits born each spring.

The Beaver Trial has now ended, with the outcome of whether the beavers will remain in Knapdale announced later this year.

Whatever you’ve seen, we would like to know about it,

so please fill in the details of your sightings on our