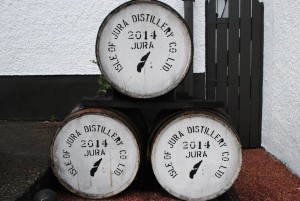 Scotland is the true home of whisky, with a good number of distilleries on our doorstep. Why not visit a few of the below on your next trip to Loch Melfort.

All whiskies can also be sampled in our guest Cocktail Bar on return.

Nestling beneath the steep cliff that overlooks Oban, and closest to Loch Melfort Hotel, sits one of Scotland’s oldest sources of single malt Scotch whisky. Oban has a “West Highland” flavour that falls between the dry, smoky style of the Scottish islands and the lighter, sweeter malts of the Highlands. You will be taken around the distillery by a knowledgeable guide exploring each part of the whisky making process.

Tobermory Distillery was established in 1798 and is one of the oldest commercial distilleries in Scotland. This unique distillery produces two very distinctly different malts; the lightly peated Tobermory and the more robustly peated Ledaig.

In 1963 The derelict distillery was rebuilt and helped revive a community. Ever since they’ve been using their incredibly tall stills to create a uniquely crafted mix of whiskies that distinguishes them from all other distilleries; sweet and mellow and rich and smoky.
A passenger ferry runs from Tayvallich, on the main land, direct to Craighouse, Jura.

Springbank Distillery is situated in the heart of Campbeltown in the Mull of Kintyre. Built in 1828, the premises today comprise not only the original buildings, but also parts of 5 distilleries no longer in use. It was originally the 14th distillery and is now the oldest and larger of the two Campbeltown distilleries operating today.