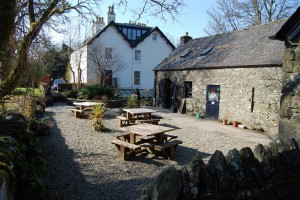 “How many museums can you go to where you can examine a Bronze Age pot and look out of the window and see the burial mound where it came from.” Sir Tony Robinson

Many of the artefacts found in the Glen and surrounding areas are of international significance, including rare jet necklaces and some of the earliest beaker pots in Britain.

The Oban Sealife Sanctuary situated just north of Oban is a major centre for rescued seals and their pups, otters, and they also has a spectacular tank recreating life in a Scottish sea loch. Journey through over 50 marine displays and get up close to majestic sharks, graceful rays and enchanting seahorses.

The Cruachan Power Station lies deep within Ben Cruachan on the banks of Loch Awe. Visitors can view a free exhibition and then take a tour (payable) inside the mountain to see the man-made cavern with its tropical plants, viewing gallery and the world’s first high head reversible pumped storage hydro scheme.

Especially good if you have little ones to entertain on a wet day, Atlantis has

Oban’s historical and cultural history is celebrated in the Oban War and Peace Museum. The town was of strategic importance during World War II and the museum displays photos and exhibits of the flying boat bases at Kerrera and Ganavan. Visitors can also learn about the area’s fishing and maritime industries, transport links, the building of McCaig’s Tower and shinty.

Auchindrain gives visitors a fascinating and authentic insight into how people lived, worked and played in the old Highlands. Recognised worldwide as the last and most complete example of a Highland farm township, where a group of families worked the land in common. Agricultural improvements in the 18th and 19th centuries, the Highland Clearances and the development of crofting changed farming, families and the face of the Highlands forever, but Auchindrain carried on much as before, just slowly evolving. Here you have a unique opportunity to see life as it was.

When this innovative, eco friendly building at Aonad Naomh Moluag (the gathering place of St Moluag)  was opened on 17 March 2007 it  once more put the Gaelic language and culture at the heart of Lismore, resulting in the Lismore Gaelic Heritage Centre. After 13 years of hard work, members of the  Comann Eachdraidh Lios Mor broke the silence that had been imposed on the island’s culture when English became the language of advancement and the Gaelic language and culture were encouraged to die.